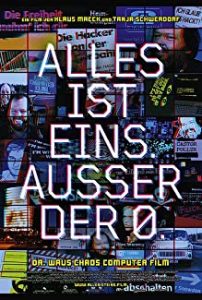 Plot: In 1981, Wau Holland and other hackers established the Hamburg based Chaos Computer Club (CCC). The idiosyncratic freethinkers were inspired by Californian technology visionaries and committed themselves to hacker ethics. All information must be free. Use public data, protect private data. But not everyone followed the rules. Computer technology was still in its infancy and the emerging Internet became a projection screen for social utopias. What has become of them? The story of the German hackers, told by the protagonists themselves in a montage of found video and audio material.Wau Holland (1951-2001) dealt with the possibilities and dangers of global information networks long before they became commonplace. Along his biography and the early activities of the CCC our documentary reflects the philosophy of hackers, being concerned about the right to worldwide, unimpeded communication in order to make democracy possible at all.Peter Glaser, writer, blogger and honorary member of the CCC, comments on the extensive archive material in which the protagonists tell their own stories. Wau Holland fights for better youth education, better privacy and against all forms of censorship until his early death in 2001. The fact that the CCC today acts as an adviser for politicians, media and business is just as much an inheritance of Holland as the increasing importance and acceptance of the yearly Chaos Communication Congresses or the development of controversial platforms such as WikiLeaks. The revelations of Chelsea Manning and Edward Snowden were causing a massive increase in club members. No surprise – the new technologies are giving us tools of surveillance and subtle manipulation that go far beyond the grim visions of ‘1984’. Today concerns about our privacy are more justified than ever. Is the idea of freedom of information still relevant? Can we still develop positive visions of the future or will the Internet plunge the world into chaos?