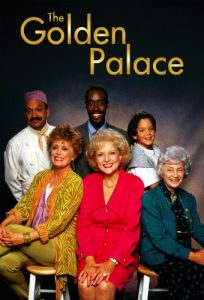 The Golden Palace begins where The Golden Girls had ended, in the quartet’s now-sold Miami house. With Dorothy Zbornak having married and left in the previous series finale, the three remaining roommates (Sophia Petrillo, Rose Nylund, and Blanche Devereaux) decide to invest in a Miami hotel that is up for sale. The hotel, however, is revealed to have been stripped of all of its personnel in an effort to appear more profitable, leaving only two employees: Roland Wilson, the hotel’s manager, and Chuy Castillos, the hotel’s chef. This requires the women to perform all the tasks of the hotel’s staff. The series focused on the interactions between guests at the hotel and the hotel’s staff, as well as between the Golden Girls and the previous hotel staff. Guest stars were frequent, including recurring characters that had previously appeared on The Golden Girls, such as Debra Engle and Harold Gould as Rebecca Devereaux and Miles Webber, and other celebrities. Bea Arthur also reprised her Dorothy Zbornak role for a two-part storyline in which she visits the hotel to check up on her mother. Following the cancellation of the series, Sophia returns to the rebuilt Shady Pines retirement home (which had burned down in the previous series), appearing as a cast member in the later seasons of Empty Nest. What became of Rose, Blanche, and the hotel is left unresolved.