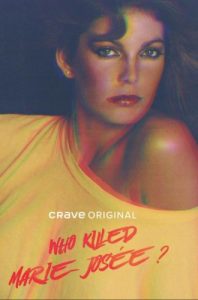 Marie-Josée Saint-Antoine, a Quebec model living in New York, was stabbed on June 18, 1982 in her Manhattan apartment. New York Police have little clue. One name is circulating: that of Alain Montpetit, a great star of television and the disco scene in Quebec. Although he is never charged, the man puts the brakes on his career and then dies of a drug overdose. Forty years later, a team is retracing the traces of this nebulous affair to understand what happened to Marie-Josée.